The Owl Box has sadly failed to attract an owl. But it is certainly popular with hornets! This was filmed on a sunny day in September. Thank goodness they are up high! But true to say although they look fierce you are more likely to be stung by a wasp than a hornet. They are valuable pollinators and keep down pests and so in fact are a gardener’s best friend. 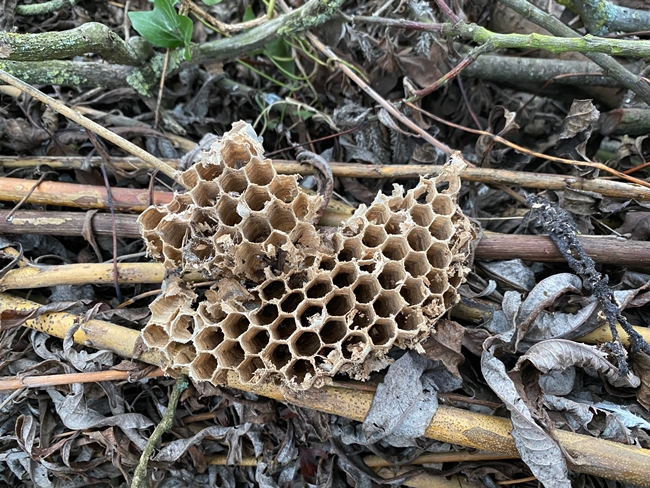 The time came late in 2021 to clean out the owl box, in the hope that we could still persuade a Tawny Owl to use it. The nest the hornets had built was impressive. The fragment shown illustrates the sturdy structure of the hexagonal cells. The hornets regurgitate wood softened by their saliva and when it dries it becomes rigid, unlike the papery versions made by wasps. It was firmly attached to the inside of the owl box. It was good job the owl didn’t return last year perhaps. And too high up for even our athletic badgers to reach - you can see a video of the badgers HERE.

Thank you for your interest!

Holt Island is open from 10.00 am - 4.00 pm on Saturdays, Sundays, and Bank Holidays between April and the end of October, subject to weather conditions and flooding.

Visiting at other times between April - October is possible by obtaining the key from either One Leisure, St Ives or The Norris Museum. You will need to pay a returnable deposit of £20.