With Holt Island closed due to covid19, Island-based monitoring of the arrival of birds across spring and into early summer was off. Instead, based on sound and sight, it was possible to sit on a wall along The Waits in the early morning and check some of what was going on. During 20 individual 10-minute morning monitoring sessions between the start of April and the end of June, 46 species were recorded on or over the island.

The first count (3 April) provided two warblers: Cetti’s and chiffchaff, and 17 other species. By mid-May there were six warbler species, as blackcaps, garden warblers, reed warblers and sedge warblers were in full song amongst the 25 or so species on any day. 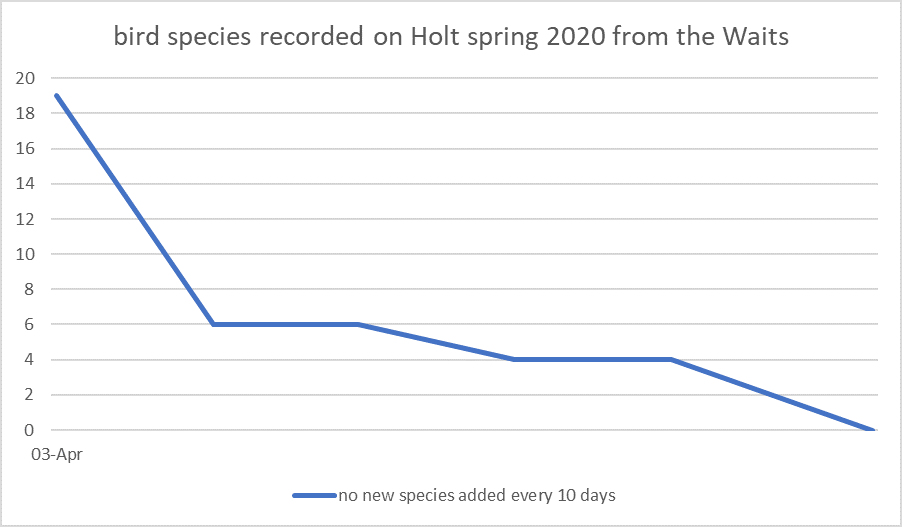 Although 46 species of birds were recorded over the three months, the most on any one day was 30 species. Wrens, wood pigeons and blue tits were always about, whilst others, such as bullfinch, linnet, and goldcrest, flickered in and out. Visual highpoints included a cuckoo and a kingfisher.

Trying to build a list on Holt Island from a wall nearby is necessarily affected by detectability. Quiet, skulking birds, such as dunnocks and long-tailed tits, were clearly under-recorded, yet they commonly turn up in the ringing nets on the Island itself. Similarly, as the breeding season progressed, so the need to sing and attract mates/ defend territories declined. Consequently, individual species began to go missing from the daily tally. For Cetti’s warbler that happened early on. Even song thrushes, heard early on in the season from way down the Broadway, became irregular in the chorus from mid-June onwards.

Hopefully, 2021 will be a better year. In the meantime, sitting on a wall monitoring birds is a nice way to greet the dawn.

Thank you for your interest!

Holt Island is open from 10.00 am - 4.00 pm on Saturdays, Sundays, and Bank Holidays between April and the end of October, subject to weather conditions and flooding.

Visiting at other times between April - October is possible by obtaining the key from either One Leisure, St Ives or The Norris Museum. You will need to pay a returnable deposit of £20.